I spent a breakfast-time at the National Space Centre in mid October – I was not mugging up on my knowledge of the planets but attending a Chamber of Commerce event at which Lord Young was the keynote speaker. I asked a question about funding for small business training which he wasn’t able to answer and after the formal part of the event I was chatting to another business owner and turned around to find Lord Young standing at my elbow and asking me to ring his parliamentary office to get more advice.

Recently I made the re-acquaintance of Barrie Rutter, the well known actor and director of Northern Broadsides. He was a very new young director when he led the National Youth Theatre company in 1969 in productions of “Zigger Zagger” and “Fuzz”. I was one of the privileged youngsters to get through 3 rounds of auditions to perform at the Jeanetta Cochrane Theatre in the . It was an amazing experience I shall always remember. My only regret was that it was 4 years too late to work with Helen Mirren! I thought you might like to see a photo taken of me at the dress rehearsal of “Fuzz” by Peter Terson – was that me!!!

Graeme Hawley (alias John Snape) continues to make headlines in . I’m afraid it will only end in tears! If you like the makeover show ‘How to look good naked’ you will have seen another of my past students, Carol Machin, who is one of Gok’s assistants. It is very satisfying to see them both doing so well.

Stewart and I were delighted to attend the wedding of another ex-student, Daniel Bruce and his lovely bride, Andrea. Daniel has made his living with his voice as a radio presenter. He got his first professional job at 18 because his voice was so rich and mature and he sounded much older. He became news editor of 5 stations in the CN group () before being head-hunted by an American company who sent him out to to train the local journalists in interview skills. Now he and Andrea are to work in with the same brief. Earlier this year Daniel contributed to my ‘Voice Matt

ers’ C.D. which gives 30 minutes of vocal tips on development and protection for all those who use their voices for a living or those who are interested in knowing more about this fascinating instrument. You can obtain your own copy for only £5 + postage. Register your details at www.loudandclearuk.com/ContactMe.aspx

I have been busy exhibiting again this month. It is very important for me to get out there and spread the word about the importance of understanding the voice and what it can do for you in the competitive business market place. I took stands at Access 2 Business in Leicester City Centre, Business Networking Clubs at Loughborough and Network Midlands at , Coalville. I also took 2 introductory workshops for the Chartered Institute of Personnel and Development. The day was organized by of First Class Training and the 20 delegates who worked with me all seemed to enjoy the experience and I have had several positive enquiries which I hope will lead to in-house workshops next year. 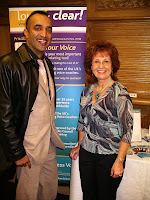 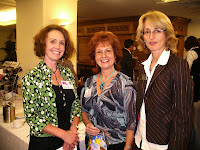 I’ve enjoyed 4 visits to the theatre this month. The , has re-opened after a face lift and I saw 2 very good ‘national tour’ productions of ‘Absurd person Singular’ (Alan Ayckbourn) and ‘And then there were None’ (Agatha Christie). At the Birmingham Rep. I saw Peter Nichols’ slightly naughty tale of wartime troop entertainers ‘Privates on Parade’. The highly talented company of actor/singer/musicians found all the comedy and poignancy in the clever script. Finally, I really enjoyed ‘An evening with Brian Rix’ in which he took us through his beginnings with Donald Wolfit’s company to the 25+ years of Whitehall Farces and, since the 1980’s, his work promoting MENCAP. He had lost none of his comedy timing despite being 84!

I examined for LAMDA in this month – a day of acting and musical theatre and I was very impressed by a tour of Central Vision Studios, . www.centralvision.tv If you are looking for a sound recording or a short film the technical facilities at this small studio are quite outstanding They were funded by Sony to a figure in excess of £2million and the expertise on offer is clearly evident in the samples of work I saw.

There’s just over a week to go before my next open workshop ‘Voice Matters’ at the Marriott Hotel, . I’m delighted to say that again this session is sold out and I already have a list of interested businesses for the next one on 4 February 2009. If you are interested you can obtain a booking form by clicking the link on this page: www.loudandclearuk.com/Voice-Workshops.aspx You can also see what others have said about me and the benefits obtained from working with me here: http://loud-n-clear.dev.cc/Testimonials.aspx

Tip of the month

Do you want to market your business for free? Then learn to use your voice as a marketing tool. It will give you impact in those initial meetings, help convert interest into sales and make you memorable. Your voice can give you the edge – learn how to use it well!

Do you realize that every time you open your mouth to promote yourself or your company you are influencing others subconsciously. Surprisingly, this has…

Hello everyone, What happened to the Summer then?  The weather wasn’t up to much and, as always, it went very fast.  As I mentioned…

Hello everyone, In August Stewart & I will be celebrating 40 years together.  How on earth did we get to our Ruby anniversary? …

Priscilla goes though the Looking Glass!

Hello everyone, As many of you know I began my working life as a speech & drama teacher and over the last 40 years…