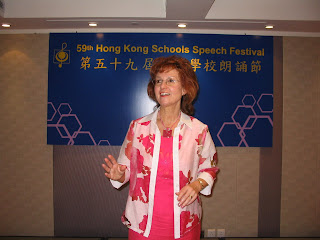 I had a very exciting conclusion to 2007 working for 4½ weeks in Hong Kong, Kowloon and the New Territories as an adjudicator for the Hong Kong Schools Speech Festival. This involves judging classes of youngsters aged 5 to 18+ on the speaking of poetry, public speaking, reading of prose, acting, Shakespeare, choral speaking, mime, improvisation and related areas of oral communication.

The festival is a mammoth event with more than 80,000 entries each year. About 15 adjudicators are invited from the U.K and, personally, I must have written in excess of 3,000 reports this time! This was my 4th visit since 2000 and I always find it a vibrant, fascinating place. Yes, there are a lot of people but they get around without difficulty on the excellent transport network of MTR(underground), buses, trams and seemingly endless taxis and they are all so friendly.

The youngsters enter the festival because schools see it as an excellent opportunity to practice their English while gaining confidence in front of an audience and getting expert advice (hopefully!) from the adjudicator.

I was able to see real life for Hong Kong inhabitants as many of my classes took place in outlying districts beyond Kowloon where no tourists ever venture. It is strange to go out for a walk at lunchtime and be the only Western face in the street, or more likely shopping area, as every district has a grand shopping mall with plenty of opportunities for bargains!

I shall be returning in 2009 and I look forward to it immensely and whenever I think about the 3000 youngsters I heard I remember that I couldn’t speak a poem in Cantonese and I have the greatest respect for them.

On my final day I was interviewed by a Hong Kong Television Company, RTHK, for a programme to be broadcast in February to accompany a gala concert of winners which will be shown throughout the Territory. I was asked why I liked coming to Hong Kong and replied “It is exciting, unpredictable, constantly changing, welcoming and fun”. I am very fortunate to be able to mix business with pleasure in this fascinating place.

On my return I caught up with the antics of my ex student, Graeme Hawley, aka John Stape (the teacher) in Coronation Street. His risqué relations with 16 year old Rosie came to a head at Christmas and what an explosive exit he had! I have spoken to him since and we may not have heard the last from John – watch this space!

I’m preparing now for a busy January with several speaking engagements and a workshop on Voice Protection for the ASA in London. My drama school clients will return from January 7th and I have whole day meetings for the Voice Care Network Trustees, the National Council of the Society of Teachers of Speech & Drama and LAMDA Examiners at the Drama School in London..
I now have a CD available with tips for the optimum use of the voice in business called “Voice Matters” – please phone or email for details.

That’s it for now. I’ll be updating later in January. I hate my voice!

Hi y’all (a clue to where I am!) Went to see ‘The King’s Speech’ earlier this month.  Brilliant film and I hope Colin gets…

Do you ‘Project’ your business?

Did you realise that the ‘quality’ or ‘sound’ of your voice affects people more than the spoken word? When people say “speak up”, they…