If you read last month’s blog you will know that I have just spent six weeks working in Sri Lanka as an adjudicator at the Performing Arts Festival.

At the beginning of June my colleague, Mary-Ann Tear (from Singapore), and I set off to travel up country with our support team. The roads in Sri Lanka have improved a lot in 10 years so it only took around three hours to reach the tea planting region of Kandy and Nuwara Eliya. On the way we made a stop at the Pinnawala Elephant Orphanage where we got up close and personal with some of the gentle giants. Temperatures in Nuwara Eliya are very pleasant. It was built by the British as somewhere to escape from the heat of the lower lying areas and there are big open spaces with cricket pitches and parks and a grand old hotel which has been nicely renovated. The work in this area is interesting as it is less likely that English will be spoken at home so often pronunciation is less precise.  Enthusiasm, however, is not a problem!

After a few days we came back down through endless tea plantations to Bandarawela. This is a bustling place with another old hotel built in 1894. The Banderawela Hotel retains its original state which, amazingly, includes roll-top baths and boxes to stand on to get in them! It is pretty quiet at night apart from the call to prayer at the neighbouring mosque at 4:30am!!! 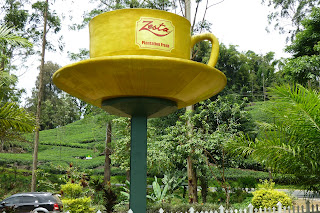 The drive back down to Colombo was spectacular. It took around six hours but the first section was through a market gardening area and hairpin bends around the top of the small mountains which make up the interior of this region. Often you were looking down into this beautiful wilderness. At lower levels there were numerous paddy fields and then the noise and traffic of the metropolis. The driving is appalling. It’s a wonder more people aren’t killed. The last hour in the dark was not much fun.

From 8 June I was resident at the Galle Face Hotel. This is an iconic image in Colombo which was built in 1864 and sits right on the Indian Ocean. It has been beautifully restored and I was very comfortable there as work continued every day. The adjudicating began at 9:30am and usually finished around 5:00pm. For the next three weeks I worked six days out of seven and saw all age groups from 3 to 25 in all disciplines – acting, mime, verse and prose speaking, reading, public speaking, recital, group performance, storytelling and sight reading.

In the last week we began three days of finals where class winners from around the country competed against each other and then we had a best performance concert to find the top entry in the island. I had the pleasure of meeting the British High Commissioner Sir John Rankin who was the special guest. I wore a Shalwar which is the local traditional dress and was really proud of the standard achieved by the finalists.

On 2 July I flew home and straight back into coaching. If you’ve never been to Sri Lanka I would thoroughly recommend it as a holiday destination.

Do take a look here to see the great value half day courses on offer from Loud & Clear in September, October and November. Can you afford NOT to know these essential business skills.

Remember Loud & Clear – a business that speaks for itself!


Have a great month

FACT – Public Speaking is one of the scariest things a human being can do. Why?  Well because when we stand there in front…