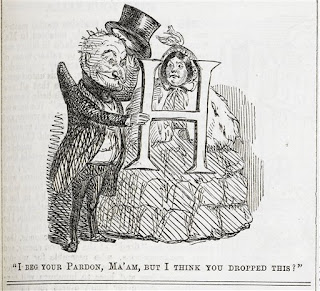 Hello everyone,
I think I may cause some heated debate with this month’s subject.  Dictionaries give ‘Aitch’ as the standard pronunciation for the letter H but ‘Haitch’ is increasingly being used all across the country.  Polls have shown that this is particularly seen in the younger generation.  The British Library wants to get a clearer idea of how spoken English is changing by recording lots of people reading the opening paragraph of the Mr Men book, Mr Tickle.
Language is always developing.  In 1928 the BBC’s pronunciation guide said that ‘pristine’ rhymed with ‘wine’; ‘combat’ was ‘cumbat’ and ‘finance’ was spoken as ‘finn-ance’
Why some words change is a bit of a mystery.  Some changes have come from the influence of American T.V. but why ‘garage’ had changed to ‘garridge’ is not easy to explain.
The eighth letter of the alphabet causes ‘aitch anxiety’ in many connoisseurs of the English Language.  In the 19th century we pronounced hospital and hotel without the H – now we sound it but Americans still drop H in ‘herb’ because they have less class anxiety attached to pronunciation.
Language changes continually, with each generation talking slightly differently from the one before.  Children learn from their parents initially, then they are influenced by children at school but the link between class, voice and status is not what it was.
We still make assumptions based on what we hear but some people are more tolerant of non-standard speech.
So what’s the answer – Haitch or Aitch?  Well the latter is still the norm.  Does anyone seriously refer to the NHS as the ‘En-Haitch-Ess’!  Will we still say the same in 20 years time?  Your guess is as good as mine!
I’ll leave you with a quote given to the BBC by Sandy Fox of Derby:
“If haitch becomes accepted I am happy to change my view but I will never change my feelings about sloppy or lazy pronunciation.  While language does develop and evolve, some uses are simply incorrect and probably always will be.  In speaking, as in writing, clarity is all.”
I couldn’t have put it better myself.
On the ‘Loud & Clear front’ it has been another very busy month although I was in Plymouth adjudicating for 6 days. I also adjudicated in Colne, Lancs. for a day and examined in Cambridge for 2 days.
On the workshop front there was a ‘Dynamic Speaking’ day in Leicester, a ‘Voice Matters in Business’ half day, two ‘Being Vocal in a Man’s World’ half days in Solihull and Kettering and a second day of bespoke training for Cemex, Rugby.
If you’re interested in what’s coming up see here You may be just in time for ‘Voice Matters in Business’ in Solihull on 2 December and ‘Being Loud & Clear’ in Leicester on 6 December.  Each of these courses costs only £40. This is probably the last ‘Being Loud & Clear’ course until autumn 2012 – just 4 places left! (book on both for only £75)
Well, we’re on the run up to Christmas now and I would like to thank you all for your tremendous support over the last 12 months and for giving me one of my most successful years to date!
Have a wonderful festive season and enjoy your work-free break!  Don’t forget to follow my tweets – @VoiceExpert
Speak wisely

Hello everyone, In August Stewart & I will be celebrating 40 years together.  How on earth did we get to our Ruby anniversary? …

I had a very exciting conclusion to 2007 working for 4½ weeks in Hong Kong, Kowloon and the New Territories as an adjudicator for…