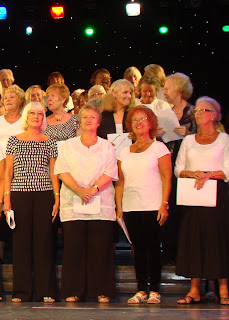 Well I can’t talk about work this month because I didn’t do any in April!  I have to own up that I was on holiday travelling to some very interesting places on a ship. Before you all go ‘lucky so-and-so’, I did get a nasty bug which I still haven’t totally shaken off after 3 1/2 weeks but I must admit I had a good time.
There were one or two occasions when I was very struck by the power of the voice; sometimes on me and sometimes on a larger audience. It was not lost on us that we were travelling on a ship at exactly the time when the Titanic was lost 100 years ago in fact quite a lot was made of it including a special service in the theatre on the Sunday. As a member of the passengers choir, I was involved in the singing of ‘Nearer My God To Thee’ which is believed to be the tune the orchestra were playing as the ship went down. 60 voices singing in harmony with such an emotional subject had a huge effect on the audience as you can imagine. It’s that power to move that comes from the special sequence of sung notes or the sincerely spoken words. Our brains connect with the message and we feel emotion which can be overwhelming.
The spoken voice had a very different effect on two separate occasions. One evening, in rough seas, the ship tilted quite markedly to the right and stayed there for what seems like ages (actually about a minute). It was comforting to hear the captain’s voice about 5 minutes later explaining very calmly that we had been hit side on by a large wave but that everything was fine. When a female officer’s voice was piped through to every room in the ship, including cabins, saying “assessment party to deck eight zone five” the tone of the voice left you in no doubt that this was serious. I was instantly in ‘Costa’ mode. Should I grab my valuables and find a lifeboat? Luckily the alert was quickly cancelled and we were informed that someone had decided to get rid of some rubbish by burning it in a wastepaper bin and it had nearly got out of control. And the lesson?….. your vocal tone will give your real feelings away so don’t forget to mean it!
That’s it for this month. I am only in the UK until 18 May and then I’ll be flying to Sri Lanka where I’ll be judging the national speech and drama competition for six weeks. I’m hoping to get a blog to you early June about my travels. Do take a look at my newly redesigned website and remember to connect with me on LinkedIn and follow me on Twitter @voiceexpert.
Have you worked with me one to one of attended a workshop? PLEASE WRITE A TESTIMONIAL FOR LOUD & CLEAR which I can put on the website.
A full range of workshops are available in Leicester during autumn and I hope you will join me for one of them. In the meantime remember:
Talk may be cheap but your speech should be priceless
Speak wisely

I am writing this on a flight returning from Kuwait where I have been examining for LAMDA.  I’m not going to tell you about…

I’ve just finished watching the final of ‘The Speaker’ on BBC 2. It was interesting that all 3 finalists had precise speech & confidence…

THE CULT OF CELEBRITY

Hello everyone, I hope you’re enjoying the sun (when it’s out!).   It’s amazing to me that every time you pick up a magazine or…

Exporting Your Voice Does your business or brand have aspirations or limitations?  I ask this because when you are a sole trader or an…