If you are frightened of standing up in front of an audience, you are not alone.  In fact, you are in a large majority.  Unfortunately that is not a lot of help if your job requires you to do it.

There are a lot of posts around which give you advice on how to cope with this and everyone has to find their own way.  What I’d like to do here is share an experience with you that I had a couple of weeks ago.  It was the night before I delivered the final workshop on Public speaking for a large training organisation.  In that session attendees were going to try out their Public Speaking in a supportive environment.  The senior manager called me to say that the youngest attendee had told her that she “didn’t feel ready” and thought she “needed more time”.

for the senior manager this wasn’t an option.  she described the trainee as having all the required skills apart from this one and without it she was going to hold herself back.

So we discussed what to do.  the manager (let’s call her Joan) came up with the idea that she would stand up with her and they could do a joint presentation.

On the day the attendees got up in turn to present.  They were very varied in standard as some had some experience and some were complete beginners.  Also, some were natural performers and some were not.  In other words, they were a good cross-section with regard to Public Speaking skills.

As arranged, ‘Joan’, stepped forward with ‘Bridget’ and gave her a cue.  No words came out – instead, ‘Bridget’, looked at the audience with a sense of panic and burst into tears.

The audience of colleagues were instantly supportive, of course.  ‘Joan’ took her outside to settle and after a while she came back and took her place at the tables.  Oh well, I thought, we gave it a try and other members of the group continued to have their moment in the spotlight.

My job during these presentations, was to write an in-depth assessment of vocal delivery, body language and speaking techniques, so I was still writing with my head down when I suddenly heard a breathy voice saying “I’ve got a new car, it’s red, and it’s just out there”.  I looked up and there was ‘Bridget’ at the front and talking.  The voice shook at the start and there was a lengthy pause for some steadying breaths when I thought she would stop, but she didn’t.  She knew she had to do this to conquer her fear and she used the positivity of her audience to help her.

I looked at her colleagues – their bodies were leaning forward willing her on.  The faces were bright and smiling at her.  ‘Bridget’ kept talking.  It was rather out of control and definitely not easy to understand at times but she wasn’t going to give up.  there were no notes as she hadn’t prepared anything.  This was just speaking from the heart.  It wasn’t meant to be a great piece of Public Speaking but for ‘Bridget’ it was very important.

When she finally stopped, the room exploded with applause and cheers.  Tears flowed again but of joy and relief.  she received all the congratulations of her colleagues with a beaming smile.  she had faced her inner negative voice and conquered it.

Having made that breakthrough ‘Bridget’ can now begin to develop some confidence.  This will take time.  There is no quick fix to becoming good at anything, especially Public Speaking, but as with many other things, practice makes perfect.

So if you think Public Speaking would help your personal development or your business, you will need to face your fear, just like ‘Bridget.

It is not a weakness to feel scared, it is normal, so don’t beat yourself up.  The only way to start is to find and audience.  This doesn’t need to be large and make sure you are speaking about something that really matters to you.  Remember that the first time will be hard but the it then gets easier.  Perhaps you could get practice by joining one of the speaking organisations like Toastmasters, Speakers Clubs, PowerTalk.

Hope you found the story of ‘Bridget’ uplifting.  I will certainly never forget it.  She was brave – that is the only word for it and I wish her all the best in her professional life.

Communication works best if it contains a little touch of magic.  What do I mean by that?  Well, when you are delivering a…

How old do you sound ?

How old do you sound ? I have an interesting question for you in this blog. There are individual physical attributes that alter the… 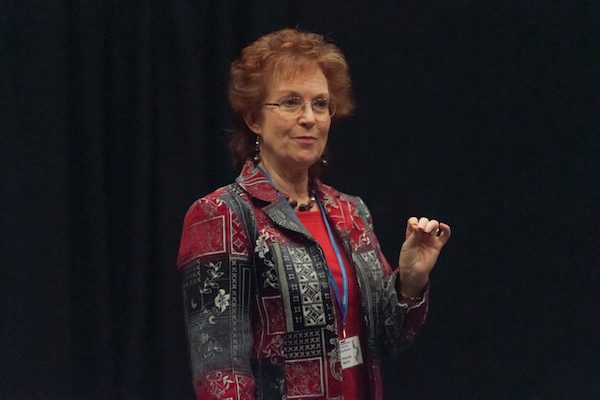